A Marine's Memorial Day Wish (White Crosses in the Pacific)

I recently came across a college essay my father Michael John Bonagura wrote on January 10, 1946. I’m thinking it must have been for his freshman composition class at Seton Hall University in South Orange, New Jersey. He was reflecting on his experiences while fighting in the Pacific Theater as a United States Marine during the Second World War. The topic was to write about your travel outside the continental United States, and how the experience had changed you in some way.

I can tell he is very conscious of writing an "essay" for an English professor and of not wanting to say too much.  He is also testing out his new and sometimes awkward understanding of grammar and sentence structure. My father had previously dropped out of high school after the tenth grade. College had to be a huge challenge for him at this point in his life.

In the essay he describes his feelings just before experiencing his first combat reflecting on his last days training on the island of Tutuila or American Somoa. He was rather fond of the locals he met, and he stated he hoped to return someday to visit with his new friends under more pleasant circumstances: "All was quiet and one could hear a native guitar strumming lazily in the mystic night. Except for the enchanting music and the peculiar sound of wild birds, you felt you were merely existing and not living, but soon after you had time to write your last letter and say your native farewells, the tenacity became excitement and your troopship was steaming slowly into the vast, blue Pacific into what might be another American's permanent home or to speak more bluntly, his grave." 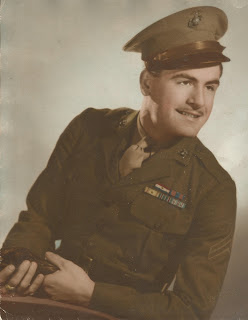 He was twenty-two years old when he entered college, though he seemed much older as evidenced by the above photograph. In the short essay, he also describes Post Traumatic Stress Disorder (they called it "Operational Fatigue") and Traumatic Brain Injury (then called "Intercranial Injury") quite well.

He had traveled all over the world and fought in some legendary battles of World War II including the Guadalcanal campaign. As a Marine Raider, he had seen and experienced war and his enemy at very close range, often in hand to hand combat. He wrote about his experience on Tulagi:

"What became a constant nightmare was when our Platoon Leaders called out names for the 'cleaning up' of Jap gun positions that were located in caves in the interior of Tulagi. At the time, the newly used flame thrower was not yet put into operation. If it was, I can assure you a lot of my devoted buddies would be alive today and in all probability, they would be repeating a tale so many boys are doing over and over again. Advancing to the mouth of a cave, your only protection was the covering of your squad and the blackness of the tropics. Every yard you advanced was like a feeling of growing old and restless. You were aware that one wrong move would be your last, so you continued yard by yard, until your objective was reached."

He ends his essay speaking of those Americans who did not come home from the war; those who in his words “remained” meaning, of course, they died and their bodies were buried on foreign soil or at sea and that what needed to be accomplished for whatever reason could not have been accomplished had they returned home, war literally becoming a blood sacrifice, like some kind of primitive ritual played out on island after island in the remote stretches of the Pacific, both sides of warriors taking part in these rituals, both knowing the outcome would not end favorably for one or the other. Of those left behind my father wrote in his freshman composition:

“For those that will remain, I hope as well as millions of others hope, that they did not die in vain, for an unknown cause. I hope when the world learns to live together in peace [that] they will remember ‘white crosses in the Pacific’ of very courageous Americans who left their wives, mothers and sweethearts, only never to return, so we may go on living together in harmony, like a giant baton leading a world symphony in the music of 'Peace on Earth and Good Will Toward Men.' ”

He used that term “remain” or “remaining” frequently in the essay, as if those people were constantly on his mind, never forgotten, even in the many folds of the experiences he was beginning to undergo in his new life back home—pursuing an education, getting married, rearing children, starting a career in education—still thoughts of those that remained and by that definition would not participate in all of the mundane and wonderful aspects of life after the war back home never left him, and it was especially important to remember that what we’re doing now is everything they will never get to do. Their only home now was a graveyard far away, a grave that relatively few people would probably ever visit. There is a certain seriousness and responsibility in an observation such as this, one most twenty-two year olds would not grasp unless they had just returned from a war.

In more recent wars we bring our dead home. I can understand the reasons for that, but I wonder if they way they did it in WW II wasn’t the better way—all buried together in massive cemeteries marked by rows and rows of white crosses that remain to this day as a symbol of their sacrifice and the cost of war—that young people gave their lives for a cause, far away from the spotlight of any media attention, often in remote places, sacrificing the most beautiful and wondrous aspects of their youth, the very promise of their lives, often perishing in great pain, alone, while the rest of the civilian population can hardly make and attempt grasp the cost of the war. Of course, the way we do it now is to bring each body home individually, but in this manner, the sacrifice becomes very private when in reality the sacrifices made by our men and women in uniform are all part of the cost the nation must pay, not just the ones who’ve fought and suffered and sacrificed, but all of us, collectively. Think of the future productivity lost when a young member of the armed forces gives his or her life or what contributions might that individual have made to the collective good?

In honor of the Marines my father fought with who died, I've included some pictures of cemeteries in the Pacific courtesy of Australian historian Pete Flahavin. 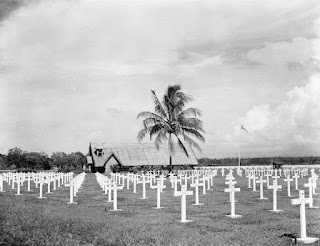 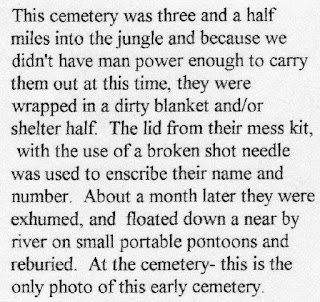 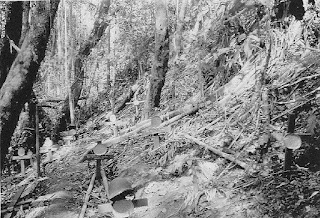 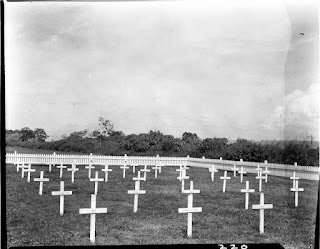 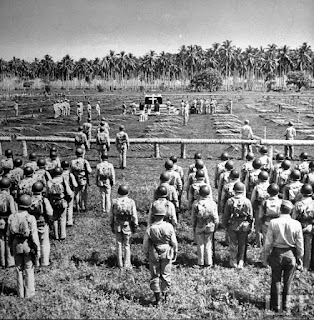 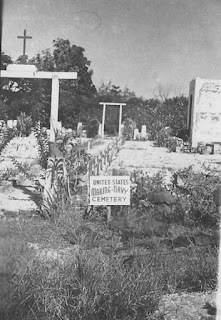 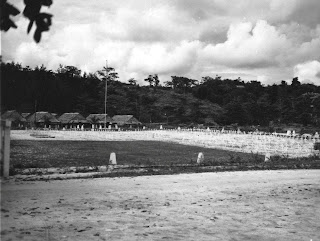 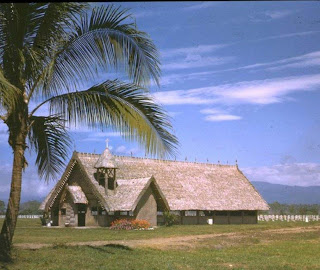 The essence of Memorial Day should allow for recognition of the gift and miracle of life in a free land while realizing we need to strive to do good things with our opportunities. As a nation that has benefited from war, we should strive to make the world a better place by employing a sense of integrity and honor in the way we use our power.

I’ve read about the national mourning that took place after President Lincoln was murdered in 1865. All over the United States people gathered at impromptu town meetings and staged marches to acknowledge the tragedy of Lincoln’s death and the Civil War, which took the lives of over 600,000 Americans in some of the most gruesome battles ever fought in the history of warfare. If you think war is anything other than a collective, organized, and senseless slaughter, no war will dispel that myth more clearly than the American Civil War. That America collectively and publicly mourned is the unique aspect.

Take for example, the following passage from the Library of Congress achieves addressing newspaper articles written shortly after Lincoln's death:

"NASHVILLE, April 19.—The procession to-day [sic] in honor of the funeral of President Lincoln was the largest and most imposing ever seen in this city. All places of business were closed, and every store and dwelling was appropriately draped in mourning. The procession numbered upwards of fifteen thousand persons. . . . The streets were thronged with citizens, who repaired to a field in the suburbs of the city, where appropriate ceremonies were held. Addresses were made by His Excellency Gov. Brownlow, Rev. Mr. Allen, and others. A noticeable feature in the procession was the funeral car drawn by six white and six black horses. Everything was suitably performed, no disturbance of any sort having occurred during the day. To-night the city is unusually quiet, all places of amusement being closed."

I cannot see this type of public experience happening today, yet I think such a process would go a long way toward helping Americans come to terms with the lasting impact of war and the sacrifices made by those who fight it, and how to help them heal. If you or a loved one has been affected by war, every day is Memorial Day, and for a nation such as ours, one in which war is so intricately woven into our culture and history, every day should be Memorial Day.