Stan Hoffman lived in Monroe Township, New Jersey when I knew him many years ago. He was part of the Brookdale College Center for WW II Studies and Conflict Resolution Executive Board. 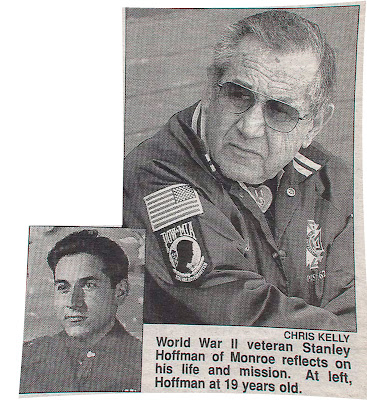 Stan was a US Army veteran of the war in Europe including The Battle of the Bulge and the drive throughout Europe to liberate the concentration camps in Germany.

I was always so impressed by Stan that I decided to interview him one day.

The following is approximately one-hour in length and unedited; the quality is good though it waxes and wanes at times. There are a few bonus minutes at the end, even after we formerly end the interview.

There is much wisdom in his words. He is such a great man. I am honored to have known him.

He offers his thoughts on HELP FOR RETURNING VETERANS and HEALING FROM THE TRAUMA OF WAR and many other topics including his experiences in THE BATTLE OF THE BULGE and THE LAST DAYS OF WWII in EUROPE!

Perhaps the highlight of my experiences with Stan was when I put together an inter-generational panel of veterans from WW II through Korea, Vietnam, and Iraq and Afghanistan several years ago at Brookdale College. He was so helpful to the younger veterans and gave out a lot of great advice; I could tell how much they admired him.

To hear the entire, unedited interview with Stan Hoffman click on the link below: